Richard as had one of his busiest year’s yet, including 5 major international tours, and virtually continuous work In New Zealand. All the while managing Parkinson’s disease.

“With respect to my wobbles, I’m in pretty good health right now, what I am doing is holding the Parkinson’s at a plateau. I’m still doing the business around the world in front of thousands.”

“The business” is simple. Traditional Māori instruments are being used as cultural markers all around us, with fragments of it on television screens and radiowaves, and in performances with a wide range of musicians nationally and internationally. 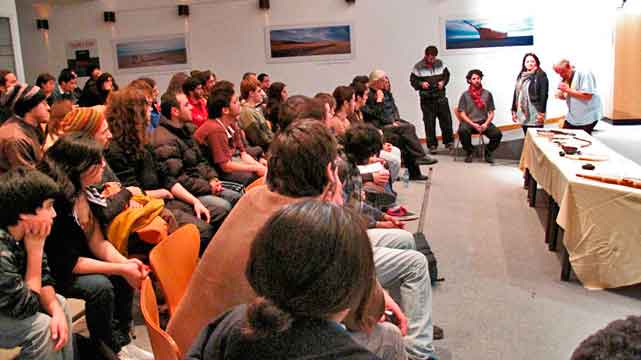 One of the highlights for 2011 occurred while in Patagonia to work on the Latitude 35 South project Richard had a rather extraordinary musical encounter with whales.

“They go to this one particular spot to have their babies. Just over 200 metres from shore there were around 70 to 90 of them. There were so many of them, after a while, rather facetiously it got boring. We were out there, looking at the whales and I decided to play some of the instruments. The whales were lying motionless and then I played the bone flute and four huge whales rose up and started looking at me. It was pretty amazing.” 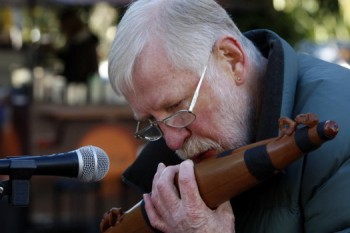 Richard Nunns performs as part of the Karakia at the start of the Trade Aid Big Bang at the top of Trafalgar St . Photo Martin De Ruyter, Nelson Mail

In New Zealand, he has performed in:

With the newly formed Nga Tae (comprising Richard’s dream team of Paddy Free — keyboard and electronica, Waimihi Hotere, vocals and his protege Horomona Horo also on Taonga Pūoro) he has performed at —

This group have just been workshopping and recording material for their first CD due out in March.

In between times he has been recording for various CDs, contributing to a range of conferences, mentoring younger Māori artists and filming for a documentary on his “story”.

This has been a huge year for CDs and CD releases

The NZSQ CD Notes from a Journey, which includes He Poroporoaki composed by Gareth Farr and Richard Nunns, won the Best Classical Album in the New Zealand Music Awards. Releases have included

In November Richard was awarded The Constance Scott Kirkcaldie Award for Outstanding Composer of Music in The Chapman Tripp Awards for his work in the Capital E production of Hear to See.